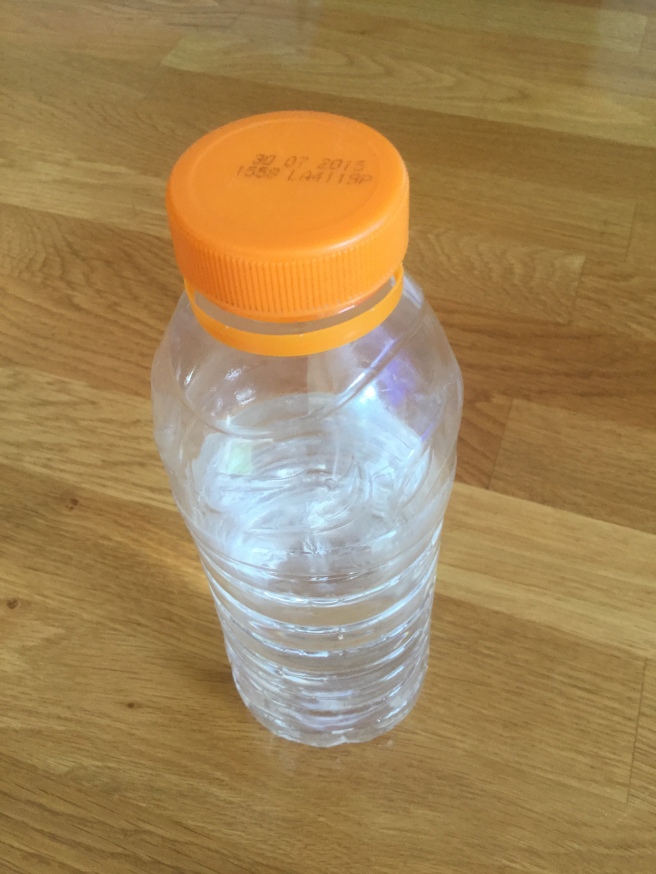 I don’t remember where I bought this, or what it originally contained. It is dated 30.07.2015. As I washed it out on our return from Champagne last Saturday I began to wonder how many thousands of miles it has travelled. It has been my familiar on every journey up and down to London, and to Southampton, to visit grandchildren; to myriad places in the south of England for lunch with friends – even on the odd if rare shopping expedition.

But it was also my companion on the great Antipodes expedition so it’s been to Hong Kong, Australia, and New Zealand this January and way above the great oceans to get there, re-hydrating its grateful owner.

Since then it has also been to

Montalcino in February with Gabrielle Gorelli for the new release Brunello (and lived through the credit card debacle at Florence airport, and the tortuous dark late night drive to a very rural,  unfamiliar destination where the key was in the door)

Verona in April for the great wine convention VinItaly and shared in the discovery of the no. 84 bus to the rear entrance (Romeo e Giulietta) of the showground

Siena and the Maremma in August in pursuit not only of Sagiovese, but also this time of Duccio, Ambrgio Lorenzetti and Simone Martini, three Operas on consecutive nights at Massa Marittima and a very special bitrthday meal at Braccali

and finally to Champagne in October with Rob and Jason, partly as guests of Ian and Sabrina enjoying a whistlestop tour of Epernay and Champagne and a glut of Michelin starred restaurants

Here it is again on the dining room table, awaiting its next adventure. 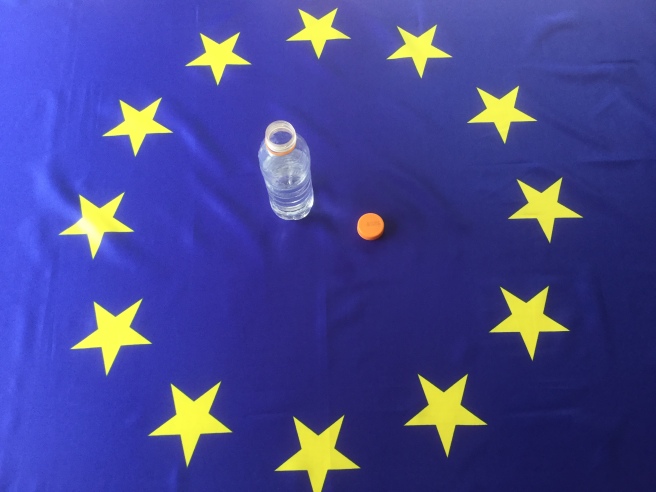 Making a bottle work so hard is part of resisting the plasticising of the planet. First plastic bags – next water bottles ! And who knows –  perhaps those ubiquitous coffee cups after that…

However, yesterday I learned that this deliberate re-cycling has a down side. I’m told that old bottles can harbour nasty bugs especially in hot weather. It is curious experience for a parent to be cautioned by one’s own child – however grown up they are…I have promised to rinse it even more thoroughly in future.

But I’m not giving it up. It will have to give me up first.

Short of accurate information, patchy internet connectivity conjured glimpses of unravelling policies, politicians and parties. Kind friends of different political persuasions but of one, european mind, sent us helpful summaries of the goings-on.

It was reminiscent of the political acrimony that surrounded UK’s entry into economic union, negotiated by Ted Heath between 1971 and actual entry in 1973. The fateful referendum result felt to us as though a latter day Moses has traipsed round the desert for forty years and landed us all back at the same place in Egypt.

It was very curious being in a country whose chaotic politics are legendary and finding ourselves witnessing similar chaos at home. The Sicilians shrug…

Let’s hope that people remember just how untrustworthy some of the main players were when the next time comes to choose leaders and parties. As some well-read politicians reminded us, Dante, an Italian who knew about these things,  put the treacherous in the very lowest circle of hell in the company of Satan (cantos 32 – 34 of Inferno for those keen to discover their fate)

From Palermo airport we drove via Trappeto, a hot sleepy ordinary town to revisit the unfinished doric temple at Segesta, built in BCE 420 (note: snails not garlic!) 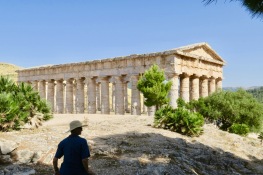 On to Trapani and the beautifully positioned Gaura apartments adjacent to the Hotel La Gancia, overlooking the sea at the heart of the town in the Piazza Mercato del Pesce. The view from the roof top was spectacular 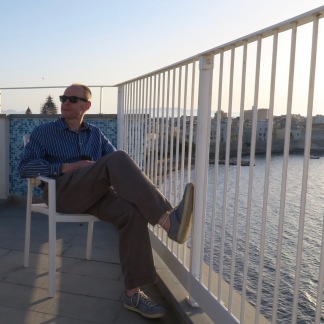 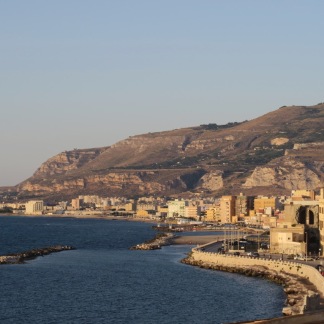 Monday: Trapani; on towards Marsala

Fazio wines where Pietro joined us to meet Giacomo on the road to Erice; onto

Firriato, at the Baglio Soria, with Andrea Terenghi and lunch; then to

Marco de Bartoli, at Samperi where we saw our one and only traditional Marsala production

Pietro led us through Marsala to the very attractive Hotel Carmine in Piazza Carmine with its quaint double room off the courtyard and severe receptionist,  strange parking and adjacent pedestrianised old centre – in which we found Slo – a contemporary ristorante alongside the greek archeological foundations of Marsala. Hot but fresh enough by 22.00

Planeta Ulmo, one of its less pre-possessing sites but where the Planeta business began. We warmed to the initially unconvincing stand-in host, and the almost abandoned historic baglio. A longish drive (90 mins) to Hotel Baglio della Luna, Agrigento, arriving just in time for a delightful traditional dinner and an older Barolo served by a highly competent woman sommelier. Temples just in view beyond their well laid out gardens.

Wednesday: Cammarata; Regaleali, and on to Niscemi

The most eventful drive over the watersheds, north, to Cammarata, with its high plains and treacherous roads (despite being Strada Provinciale) and one or two sat nav misadventures for which ‘Kate’ took most of the blame. An automatic hybrid without any manual low gears and a relatively long wheel base was the least ‘adapted’ vehicle to use on this terrain. Here D’s patience and concentration, coupled with snail’s pace slowly got us over this most unsuitable riverbed route.

Our host at Feudo Montoni treated us to a comprehensive account of the rise of his wines under Jacomo Tachis’ aegis, though withholding advice on accessing his wonderland. We were an hour late. The height, the winds and the dryness make it a v special place where trad varieties of wheat and vines have flourished for hundreds of years. Melissa, an american sicilian Manhattan restauranteur undoudtedly enhanced the already enchanting visit with her passion for herbs…

We were of course late for hungarian Bugata at Tasca, at Regaleali and her formally hosted lunch in the historic house. She won the battle about our departure time – her journey around the vineyards in an elderly white land rover was not negotiable – nor would we have wanted to miss it. She didn’t do numbers..

A longer (2 h 15 mins) drive on to Feudi del Pisciotto in Niscemi, whose huge Palmento has become the focal point of a vast restoration and luxury bijoux hotel; the winery lift served the car parking and delivered the visitor to the extraordinary refurb.  The winemaker had gone home, and we were hosted by a capable young woman whose wine knowledge was adequate for the rapid tasting and left us to dine in the newly opened ristorante above the great hall of the Palmento

40 mins away in the Valle Dell‘ Acate was Francesco Ferreri whose warm enthusiasm we had met at Vinitaly and who presently heads up Assovini. His museum palmento was fascinating; likewise his wines and six soils. Gaetana was present; less young and less glamorous but still striking as she hunted for a plastic tablecloth in a large chest. Functional ex-coop industrial looking winery

Gulfi seemed unprepared and under-staffed and the young wine maker ‘born’ with the winery in 2008 was inexperienced in hosting visitors. No tasting and peremptory visit – underwhelming !

Long drive (100 mins)  north to Cottanera, to a new and stylish winery on the lower slopes of Etna where an australian sicilian woman greeted us and hosted the tasting and lunch along with another young winemaker, and latterly an owner. Fantastic views and viniculture. MW professor expected!

On 15 mins to Fessina where wine maker Giovanni Greborio waved us down and led us to the railtrack crossing and the newly restored tenuta alongside the winery. Single vineyard bounded by recentish larva flows; pumice stone dominating. Hot and sticky tasting in small contemporary room w bar stools…v sleepy!

50 mins south to Benanti with its historic house on edge of urban sprawl to a supper and tasting after a walk up to the vineyards of this producer whose family led the recovery of Etna wines. We warmed to our host despite strong sense of his and their wines’ own importance.

Saturday: slow morning; email exchanges w Peter and Kate on Brexit; lunch in a seaside hotel in Acireale where the crudo antipasti were unadvertised but excellent. Supper on Rob at quiet Michelin eccentric ristorante on the night of the Germany -Italy quarter final. The match dominated the evening wedding celebrations at the hotel; large screens in the hot garden and all the guests cheering Italy on.

I felt sorry for the bride. The match went to nine penalties; and Italy lost.  The assembled guests were remarkably restrained…

Sunday : flew to Luton from Catania. Rob returned the car!

2 thoughts on “2016 : Montalcino, Verona, Sicily, Siena and Maremma, and Champagne – and a much-travelled plastic bottle”