The river provides constant entertainment. We have watched fleets of ducklings, swans with their cygnets (which grow so quickly!) and Canada geese with goslings 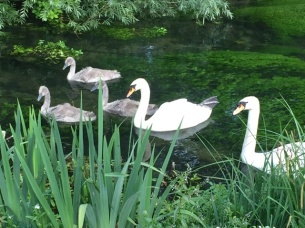 not to mention other, stranger river-goers

and we’ve listened to the persistent alarm calls of the anxious and wary moorhens.

Last week a very make-shift nest appeared on the bank directly opposite the garden; and for some days appeared unused or abandoned except by an opportunistic female blackbird after fresh nest material.

Yesterday, suddenly, a moorhen settled in and immediately a chick appeared! I still don’t understand this, unless the chick hatched elsewhere and was hurriedly re-located. Its parent struck us as rather casual, wondering off almost as soon as the chick appeared.

The nest resumed its abandoned appearance today – and the chick, sadly, is nowhere to be seen or heard.

as the whole bed lights up 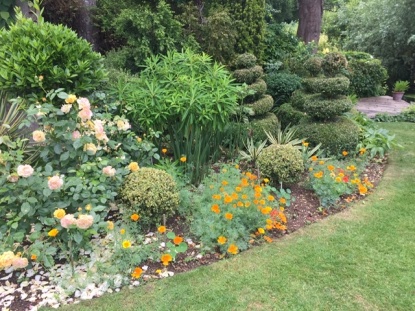 The blues deserve a mention – and I don’t mean Chelsea FC (though I can report that the re-started season is going well). Suddenly the two clematis’ flowers emerge, some from high above the flower bed 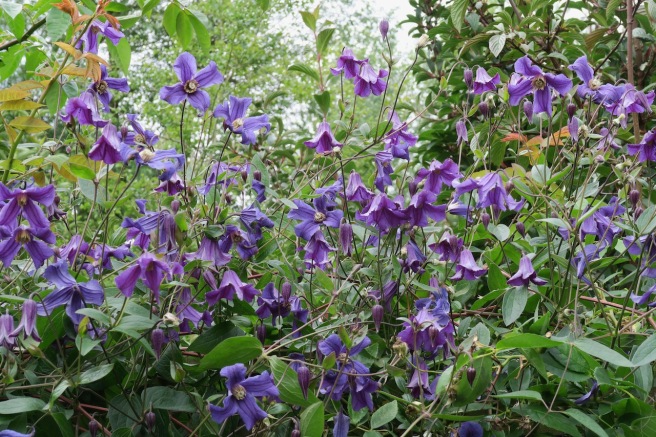 and others romping through the neighbour’s trees 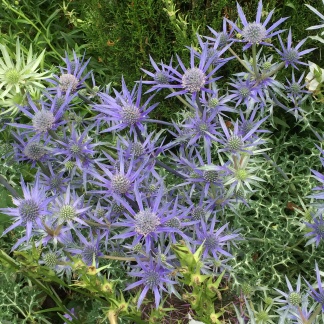 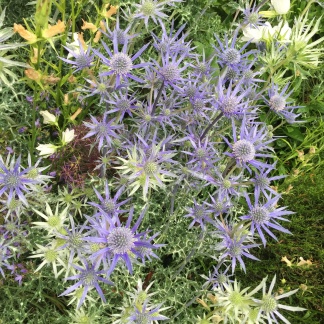 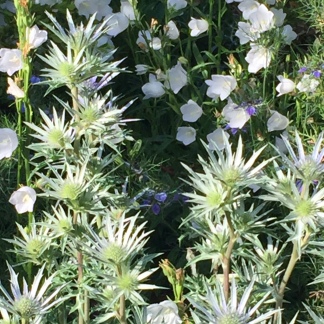 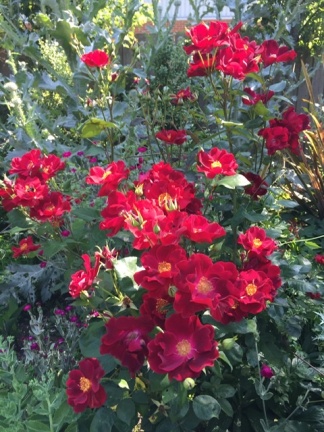 The annual Ladybird poppies grace the edges followed by an unknown tender succulent; the Heuchera looks radiant; and the thistles are huge! The Lychnis Coronaria and the Rosa Dusky Maiden clash beautifully while the Canna Champion and Eryngium Miss Wilmott’s Ghost begin to steal the show

Interest in allotments waxes and wanes, no longer fanned by hunger or wars, but by TV programmes. In a waning phase in 2011, when there were several un-used plots, we took on allotment 62, again on Barlow’s Lane. I say ‘we’ because technically it is in David’s name, but there’s no doubt that it’s down to me! 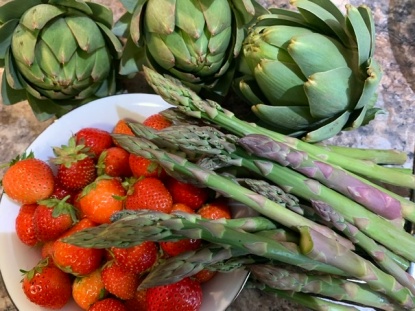 Allotment 49 (12 June in week 12) has perennials: asparagus, rhubarb, raspberry, black- and red-currant bushes; no. 62 also has strawberries and artichokes as well as annuals (below clockwise from top left): sweetcorn and borlotti beans; followed by an artichoke and peas under netting; and bottom left – the strawberry patch

and courgettes and squash; leeks; beetroot; summer raspberries out of view. 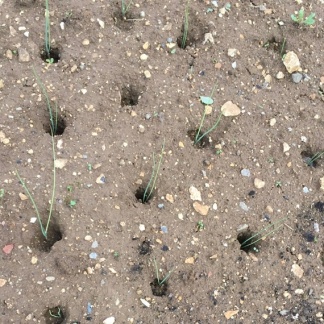 It is a lot of work – but it keeps me fit and close to the earth. They have provided exercise and sanctuary and sanity for dozens of us over 65s during lockdown.

Never have the allotments or gardens been so closely tended as this spring.

As the lockdown eased, this week was very busy – on three separate dry afternoons the garden had some very special visitors…

Gravel, as I have already written, is very versatile. And it has never failed to keep small children busy – filling boots; excavating the sub-layer; pretending to be at the beach, and most popular collecting handfuls to take on long journeys to throw in the river. Non-one has fallen in yet – and there is a little fence at the bottom of the bank.. 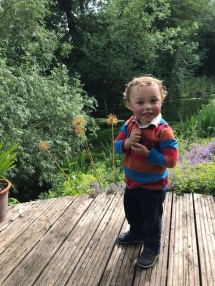 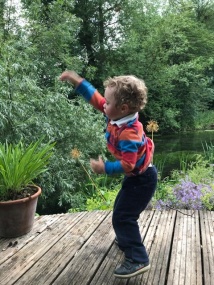 Jessica has always been a great success. The rocking horse is named after her 8 year old previous owner. It was on the point of being dispatched at the tip when she graciously agreed that my grandchildren could have her. Squeeze her ears and she wags her tail, and neighs! What more could little girls want?

More venerable equipment was put to use – my father’s army blanket that traipsed with him through North Africa, Palestine to Burma in 1943 – 1945, finally docking at Liverpool with him on 11 January 1946. The POWs and injured had travelled first.

On its label: Peerless Woollen Mill, dated 20 March 1941. A very precious relic. (Dad would have shared his great-grandson’s interest in the cricket helmet!) And below – the nearest we’ll get to camping: the family ‘hide’ – in more than one sense!

Respecting social-distancing rules doesn’t mean you can’t watch the football; or have lunch in waterproofs on a wet day or in what little shade there is on a very hot day 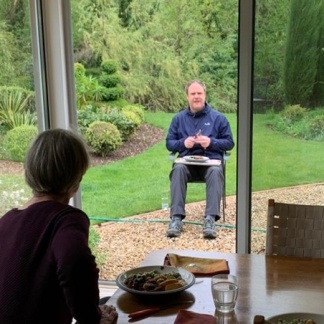 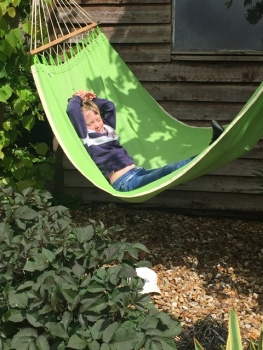 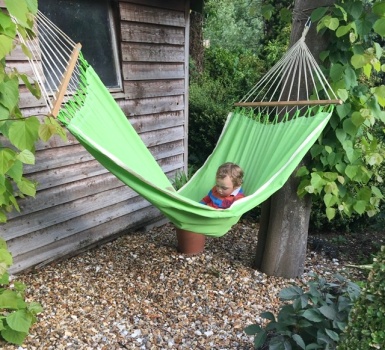 As well as small people, the garden is occasionally visited by several shy birds and animals. This spring we have seen all the creatures that follow, in our territory (ie  air-space, dry land, or stretch of the river), and all but one of the photos have been taken by us in other seasons.

Foxes frequent the woody river’s edge and hinterland, the bane of a neighbour who keeps hens. Our garden gate is no obstacle, and the log pile and compost bin offer easy exits. The movement-sensitive outdoor light once gave us a split-second glimpse of an unsuspecting young fox, ears cocked, less than a metre from the glass door.

Just like this one whose photo was taken by David but in Umbria, Italy 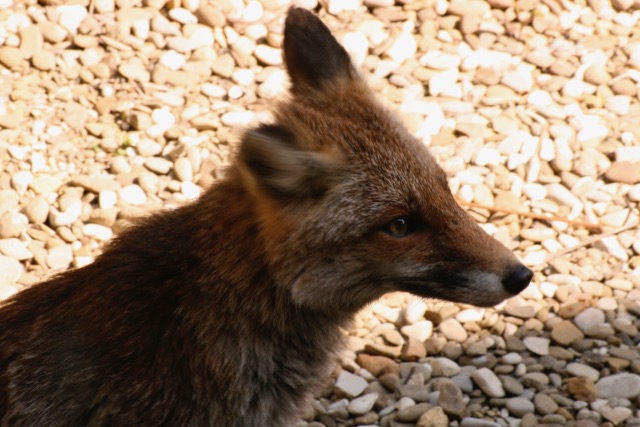 Another regular: a hedgehog whose slower movement was a joy to watch

The water rail, a very shy bird, and something of a loner, was spotted on the opposite river bank, but alas, not photographed successfully by us

Up early, standing stock still, the heron is a regular, silently waiting to snap up its unsuspecting breakfast; possibly that moorhen chick, or a young water vole or trout 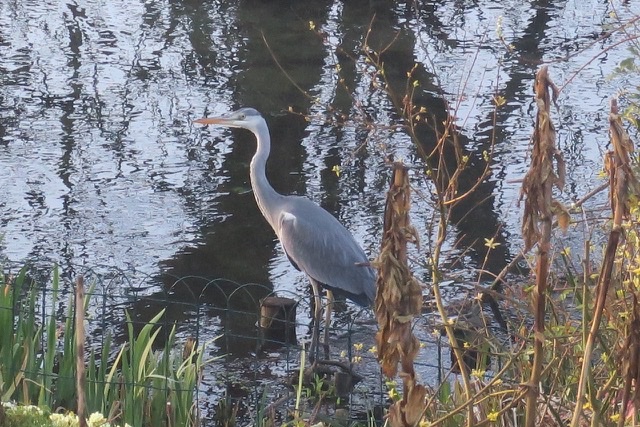 The kingfisher frequently flies across our garden, an airbridge from the little canal to the main river, and then straight and fast as an arrow along the river’s course, a few feet from its surface. This photo was a spin-off from another photo shoot – in vain pursuit of the cause of a ring of bright water I turned back in time to snap this:

We have been fortunate to have had the company of at least two separate families of otters since 2013. On a very rainy day in that mid December I saw what I thought were the faces of three cats grinning at me from beneath a tree trunk which over-hanged the bank opposite our bedroom window.

It was a surreal, Alice-in-Wonderland moment, and indeed they disappeared just like the Cheshire Cat a few minutes later. That was the first sighting of many that winter of a mother and two cubs, whose main holt was Anton Lakes, two miles upstream, but who fished and cavorted along the Anton to its convergence with the Test.

As the cubs matured, they moved further afield and were less frequently sighted, though their playful nature and apparent fearlessness of people made them minor celebrities, in and around Rookesbury Lakes, a few hundred metres downstream. 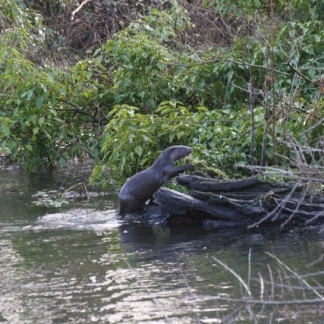 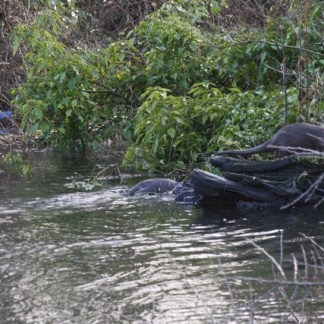 All these photos were taken from the garden; the opposite bank is c 15 metres away

A new family arrived  in 2018 and are still here. They really do look like seals !

Saturday 20 June – Summer Solstice – the longest day of the year

I plan to continue to blog occasionally as the summer progresses, but for the weekly Andover Garden Watch this is the end of spring. Lockdown is easing, and rules make way for guidelines…

There are flowers still to come, (not to mention contrasts, beginnings and ends, and juxtapositions… !) For example:

Leaving the house and its immediate neighbourhood felt scary after three months of ‘luxury house arrest’. The first drive along a dual carriageway ; the cautious socially-distanced rendezvous with old friends for walks on scorchingly hot afternoons; drinking a glass of beer outside a pub in the sunshine; cycling to admire friends’ gardens – all these felt awkward or transgressive, but a great improvement on the injunction to stay at home.

Support bubbles gave way to groups of six outside. Years R, 1 and 6 returned to school for the last few weeks of the year. Public exams were already scrapped, and after the August AL debacle, the dubious algorithm used to award results was discredited. The beaches swarmed with day trippers as ‘staycation’ entered the english language, and the autumn term beckoned businesses, universities and schools. Things were looking up.

The garden in summer was not as engaging as spring even though the ground still held some water from the previous wet and windy winter. The months of heat and dryness favoured some plants and punished others, as the sun shone relentlessly from April to August.

What would autumn bring??