This time last year we were limping home from Gorizia, grateful to be alive and mobile after David’s gall bladder crisis, and not overly bothered to have missed the largest wine fair in the world – VinItaly. This year David  had been asked to serve as a  judge for the Cinque Stelle wine competition – which meant eight consecutive days for him in Verona, as their guest, preceding and including the public days of the fair.

I flew out to join him on Friday 13 April, unfazed by superstition. We met at the station, and walked to the Hotel Giberti – central and civilised. We ate supper in the Antica Bottega,  well aware that it would be heaving for every other night during VinItaly.

We left by taxi first thing on Saturday morning, to take our luggage to the Hotel San Marco, and thence to the Fiera for a shuttle to Summa (no, not the great work of Thomas Aquinas) in Magreid, in Alto Adige. The spring sunshine and the fresh new foliage broke the spell of the many preceding weeks of of dull rain. Spring is late everywhere in Europe, it seems.

We had spent a happy day here at the end of November as guests of the Wines of Alto Adige, and the village was familiar and friendly. The outdoor tasting was delightful – though the combination of the Angelus at 12 noon, immediately followed by bells for a wedding at the church alongside, presented quite a challenge for Clemens Alois Lageder and his winemaker.

The shuttle worked a treat for our return journey – as did our use of FORK to book dinners for every evening in busy Verona: Osteria 17 on Saturday; Du Schei in Veronetta on Sunday; Campdoglio on Monday, and Torcolo on Tuesday.

I have become an expert on Verona’s buses, and careful attention to what at first appears very idiosyncratic paid dividends. The maps and timetables seem very complicated, but amazingly, the buses arrived on the dot. The only remaining unsolved mystery concerns late evening journeys…I’m still working on this…

David’s duties at VinItaly left me welcome space to tackle Verona’s stupendous cultural legacy armed with a two day Verona card.  The basilica of San Zeno was irresistible on this post-Easter sunny Sunday, and the large group baptism in the middle of the main morning mass made my day. Every baby and child was offered up by the simply brilliant parish priest as the congregation cheered and clapped as each name was declared. ‘Zeno Alexander’ nearly brought the house down…

The congregation cheered every infant and child on their Christian journey; the  priest’s pride and the families’ joy were palpable; not one infant cried. Some of us adults did. What a starting line! How many families have Andreas Mantegna’s Madonna and Saints as the backdrop, painted for that very place over 500 years ago? 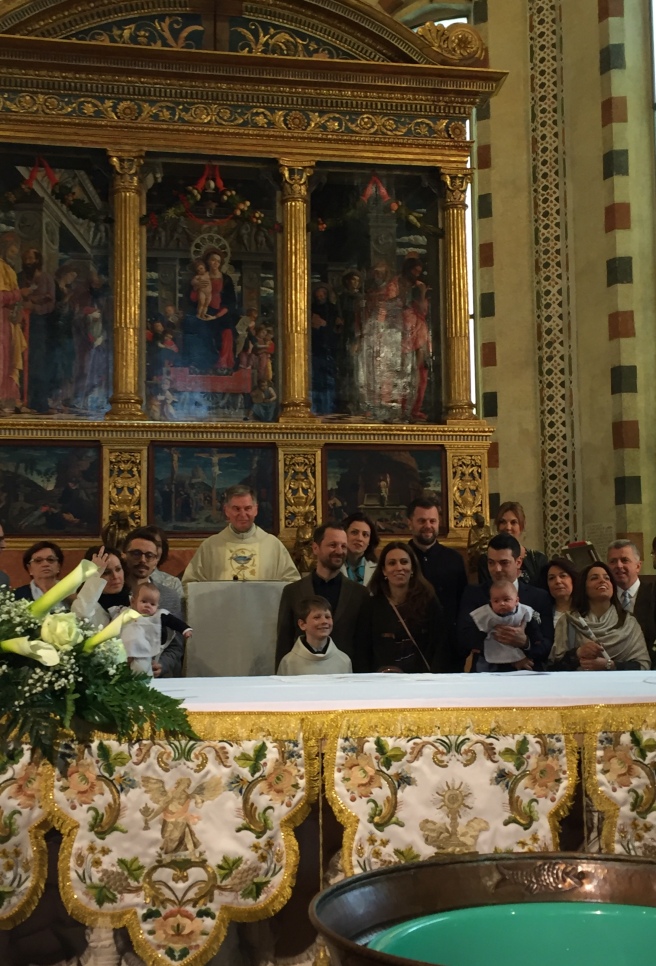 A church marked San Zeno’s tomb in the fifth century; the present building dates from the twelth and the lofty and simple Romanesque interior is exquisite, with stunning frescos complete with ancient graffiti. And it is still open for business!

Alongside the piazza in front of San Zeno, opposite San Procolo stands yet another medieval chapel now used as a contemporary gallery, a common sight in even small Italian towns. 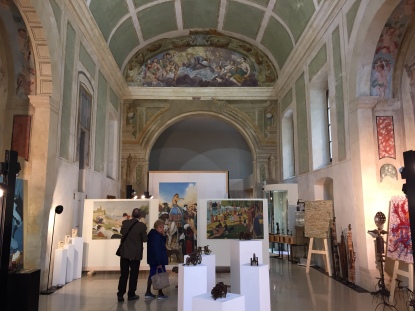 Lunch near the Piazza Bra preceded a brief visit to the Arena (didn’t enjoy the steepness of the terraces nor thinking about its brutal history) and the purchase of the great value Verona card. First visit was to the basilica of San  Fermo – an uninviting, unadorned brick build to the east of the Arena close to the Ponte Navi.

Not one, but two churches occupy the site where Fermo and Rustico were martyred in 304 CE. The Benedictines built the first Romanesque structure to house their remains, decorating with (damp-affected) frescos and reinforcing it with multiple pillars when the began the colossal upper church in 1065. 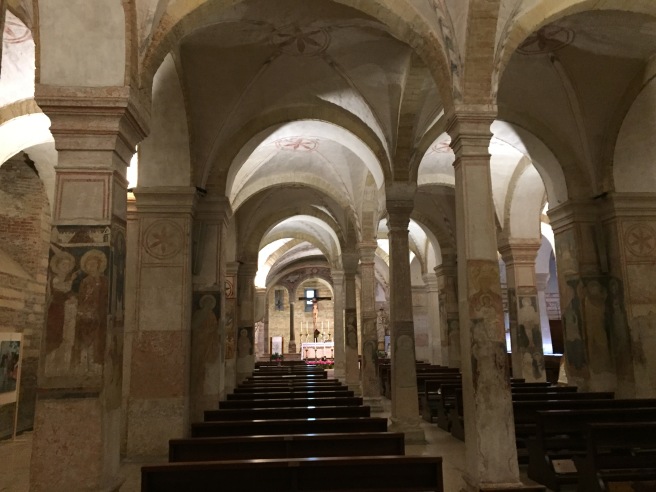 The Franciscans took over the upper church from the Benedictines, and  finished it off in their characteristic gothic style with a ceiling replicating a huge wooden ship’s keel, in 1315. Astonishing ! Here’s and the ceiling itself….and a helpful model…

In for a penny, in for a pound… the basilica of Santa Anastasia was just round the corner – the largest church in Verona, financed by the Scala family, begun in 1280.  Its exterior is as plain as the interior is elaborate. Another breath-taking building.

Perhaps the Duomo was really one church too many – even on a Sunday – but it was also just round the corner – and has the most delightful lions on guard outside the west end. The entrance to the Cathedral complex takes the visitor through the baptistry built in 1123 CE with its enormous font built from a single block of marble, on through the archaeological excavations and past the chapel of Santa Helena, built in the ninth century and renovated after an earthquake in 1117.

All this before even entering the twelth century Duomo. Time was running out (energy levels were certainly flagging). Its elaborate art, spanning 800 years,  will hopefully endure a little longer until my next visit. I hope so.