How best to spend a wet autumn day in London ?

How about a whirlwind tour of former day versions of the selfie? (though that not one of them is smiling is a bit of a clue that something rather more profound is going on)

Helene Schjerfbeck, Anthony Gormley and Lucian Freud at the RA; Gauguin at the National Gallery; and finally Zandra Rhodes: 50 Years of Fabulous at the Fashion and Textile Museum on Bermondsey Street…. 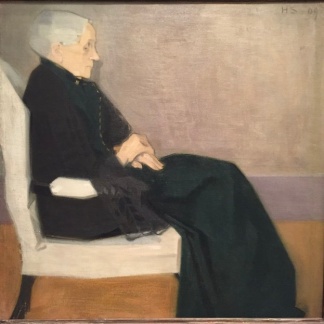 Helene Schjerfbeck (1862 – 1946) was a Swedish-speaking Finn whose life was painting, though much of her time was spent teaching art students when her health permitted, and caring for her mother in her old age. Disappointed in love (her fiance broke off their engagement) she travelled the galleries of Europe at the Finnish government’s request,  making copies of some of the finest European art, in order to furnish the sparse collections within Finland. Many of her friends were women artists; she worked with several in both Brittany and St Ives, and many of her paintings’ subjects are women or girls.

Her self-portraits are extraordinary. They show her changing appearance and artistic style, as she ages. She continued to paint these in the final months of her life, aged 83. Her final work was Three Pears, the last painting shown below.

Gormley’s work is internationally known and admired, and the gallery was heaving with viewers of all ages – notably families with children on half term, enjoying the proximity and challenges of installations and weird structures to climb through or burrow into. His use of space and materials put it all beyond my camera’s reach!

Here instead are two iconic images; one from the Courtyard, as if abandoned…

(Antony, the youngest of seven children, bears a striking resemblance to the oldest, John; an old Yorkshire acquaintance, furniture maker and founder of Treske, created in the Old Maltings by Thirsk railway station. On a cold night in 1975 he cooked us mackerel on his very smokey sawdust-burning stove, sieving the potatoes for mash)

13.00  Fled the crowds to tackle lunch. How can potato and leek soup be so green?

13.15  Lucian Freud: Self-Portraits in the RA’s Sackler Galleries ( tickets available for the first day’s private opening for members was an unexpected surprise)

They speak for themselves:

The heavy rain had driven everyone from Trafalgar Square save a young couple intent on selfies with Nelson. (It will have been a novel photo – not another living soul to be seen in this usually busy spot as the rain lashed down) The staff at the Gallery’s door were in pursuit of wet umbrellas rather than weapons or bombs, and insisted on these being rolled and stowed before entry.

This exhibition had attracted a luke-warm review in the Guardian by Jonathan Jones for its failure to own up to the issues of colonialism, cultural appropriation and the sexual exploitation and abuse of girls. Jones also criticises its coy choice of floral arrangements and still life over the lascivious and sexually explicit portraits more often associated with Gauguin, and usually judged to be ‘ground-breaking’.

It did surprise me that the euphemistic word ‘wife’ continues to be used of Gauguin’s young victims; did Gauguin ever divorce the danish mother of his children?

Gauguin’s behaviour suggests an unattractively high level of self-interest. Do his self-portraits bear this out? Do they merit our attention at all? You can decide…

17.00 Zandra Rhodes: 50 Years of Fabulous at the Fashion and Textile Museum

Zandra is a survivor. ‘Once a textile designer, always a textile designer’ she tells us, and her fabulous print-making came first; then she created dresses to maximise the patterns and the grain of the cloth. The museum too is part of her legacy; set up by her to showcase the work of british designers, and now owned by Newham council and staffed by 40 volunteers. Is this exhibition perhaps something of a self portrait? 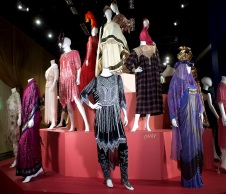 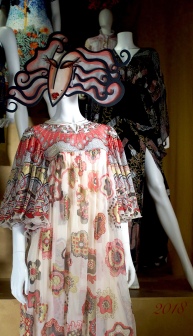 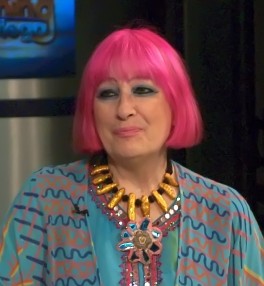 No dress looks its best on a static mannikin; it would have been an extra treat to see some stills of her creations worn by her extraordinary customers 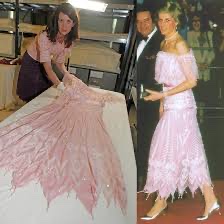 and we’ve all lived long enough to see the Queen era come round again and for Zandra to recreate the costumes for the recent film – from the very same designs.. 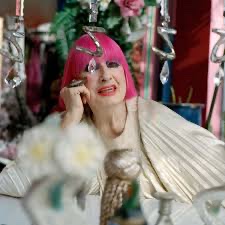 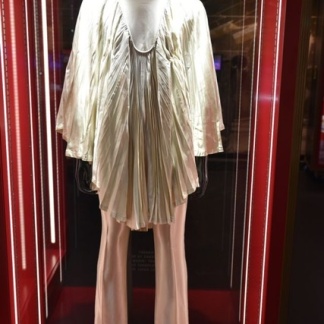 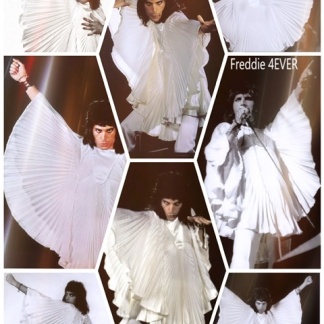 An engaging, moving and colourful day in London, despite the incessant rain.