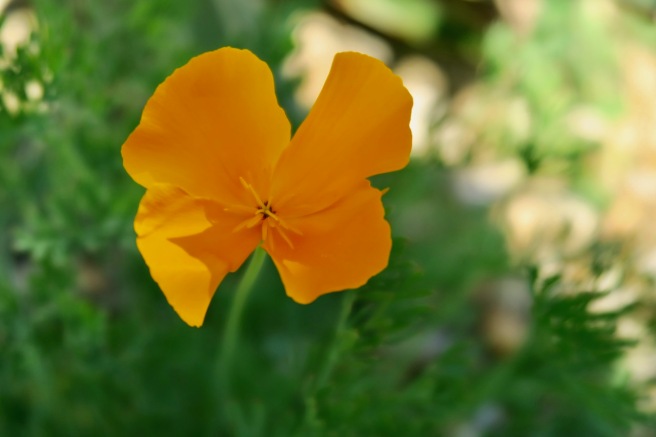 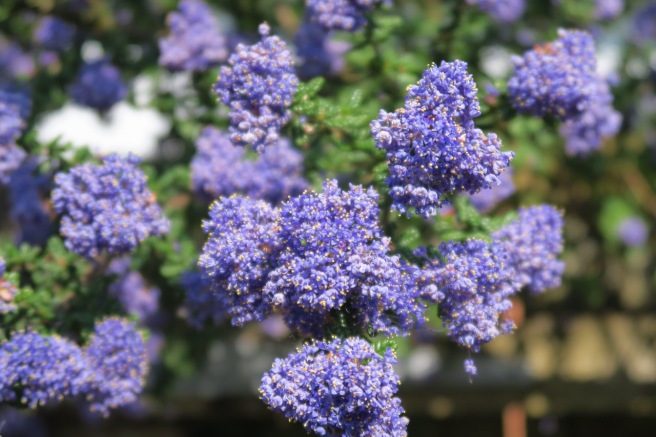 The Ceanothus on the point of fading enjoys a final fling

The ranks of allium form a fitting foreground for the Euphorbia

Monday 27 April – and the weather’s on the turn…

These are more modest little numbers: shy violets and the only other tulip the squirrels missed!

There’s another treat shyly waiting in the wings.  Rosa Blush Noisette – a family favourite; it has been resident in six different Tomlinson gardens in the last 30 years

Here it is alongside the glory-hogging wisteria.. second fiddle for not much longer!

These are the views from the day room upstairs. How the rain alters the colours!

You might be wondering what has happened to the grass. Despite the wettest winter on record, the grass has only needed mowing twice so far in this hot and dry season.  Having found some lawn sand in the garage (left in 2003 by predecessors) and with time and a scarifier on my hands, I decided some improvement wouldn’t go amiss. This isn’t the first time I’ve wondered why I bothered. I should have left well alone. 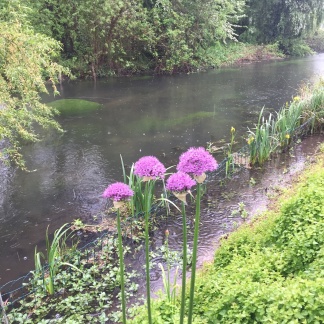 Wednesday 29 April: not as much rain as we’d been promised

In between the April showers I set about netting the Morello cherries. 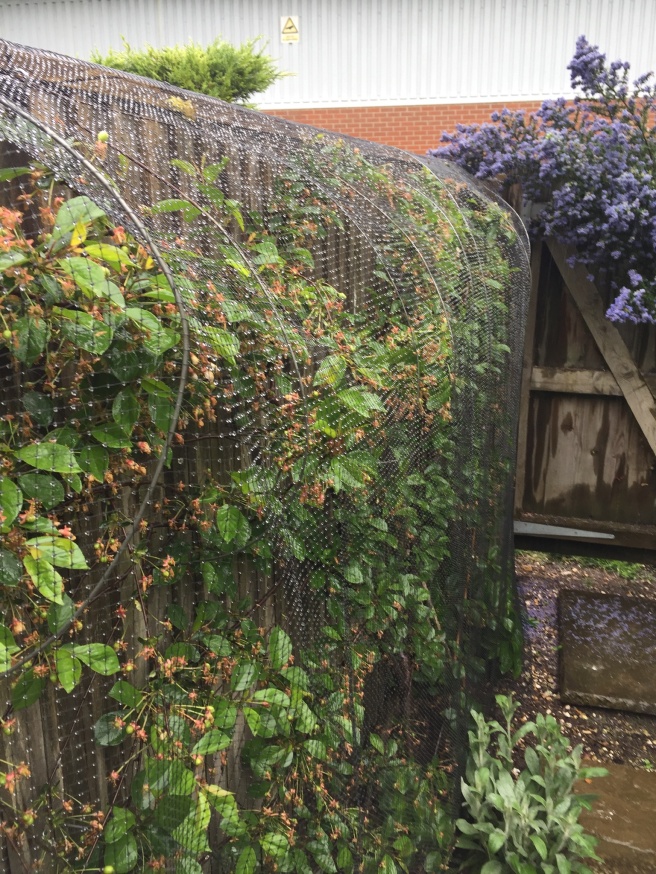 It looks much more sophisticated than it is! Two metre width netting, spare from the  the fruit cage, tacked on to the top of the fence, puffed out by bowed heavy-duty wire, and tent-pegged to the ground 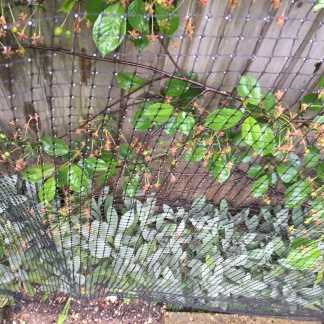 A pretty firm lock-down – though if you look closely inside you can see some Lychnis Coronaria (I kid you not!) which are definitely socially isolating, and in the right circle, several brave key workers who have slipped the net! 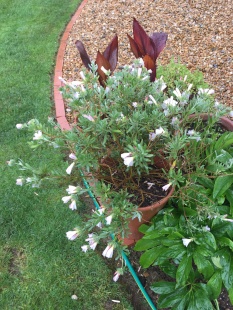 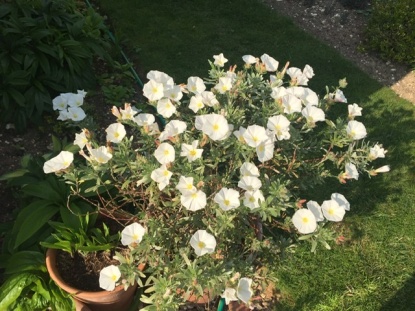 The Convolvulus cneorum doesn’t enjoy the lack of sun. Seriously sulky today, compared with only two days ago. I hope it relents!

It rained heavily for most of today so some long-overdue indoor cleaning took place.  However, at tea time the weak sun broke through, and we glimpsed new treats

For example, the wisteria has never flowered on the front of the house before 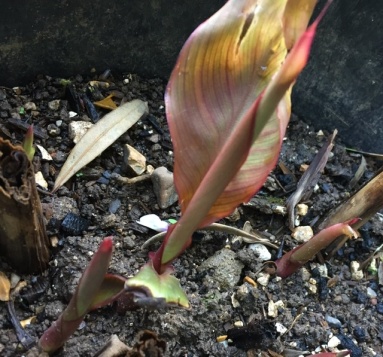 And the cannas are on their way 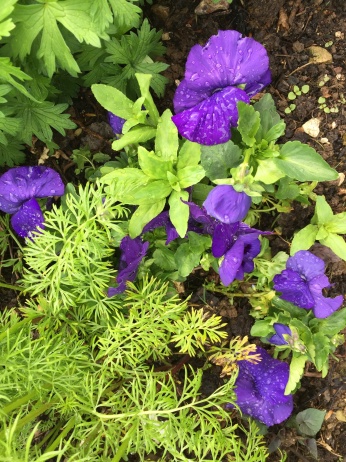 Friday 1 May : May Day – or the Feast day of Joseph the Worker

The sun shone brightly though the wind was brisk, and the air much cooler 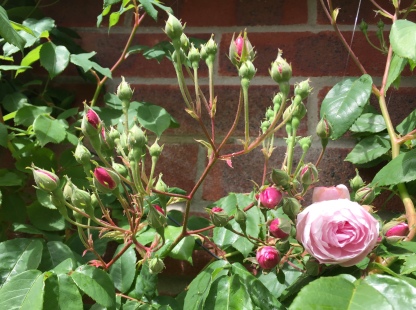 The front garden allium have been joined by a cousin from the back garden. We hope this plant is going to morph into large white spheres… we’ll see 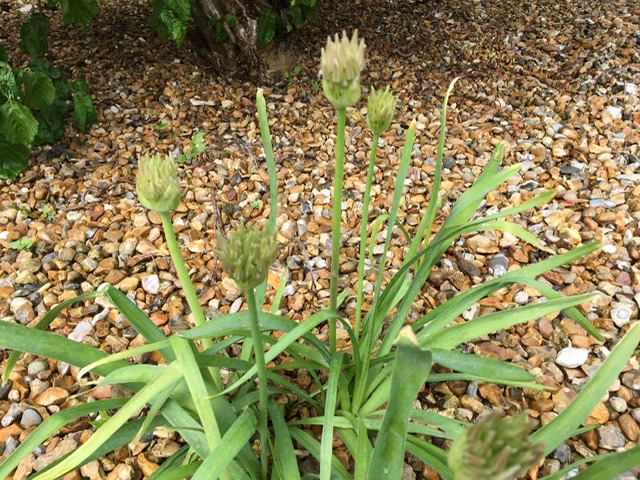 Meanwhile the tiny Californian poppy seedlings below, whose parents are the orange stars of the front garden, are clinging to life in the back garden where I sowed them a month ago, in an attempt to fill a conspicuous gap created by the closure of garden centres.. It’s these – or nasturtiums – for the rest of the summer!

Talking of alliums – these are on their spectacular way, slowly emerging from their rice-paper pods and gracing the garden

On a much grander scale, the Gunnera slowly unfurls by the water’s edge 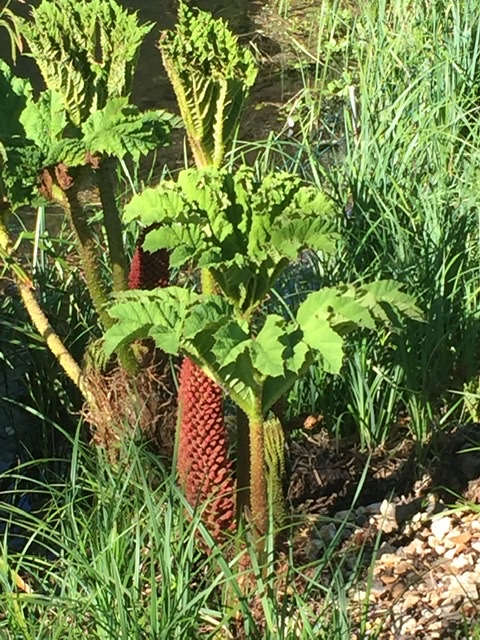 Finally, as every gardener knows, there’s always something that isn’t quite right. I should never have boasted of my success in propagating white foxgloves. Guess the colour of my tallest and most robust specimen? Look carefully… It’ll have to go!